Idle Musings while waiting for the Pumpkin to go away…

Imagining what life will be like with only one Swift! Yes, Virginia, it is highly likely that the orange Swift, affectionately known as the Pumpkin, will be leaving Midland bound for the far north country (aka Indiana), to terrorize the skies there. Hopefully all of this will transpire sooner rather than later, and I can move on with my quest of returning the SNJ #24 to the Coombes family. All things being equal, that transaction should take place around the middle of January. I’m not abandoning the world of Swifts however, as the Tomato YGC-1B will still remain part of the fleet. 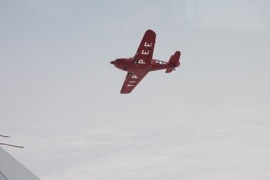 This entry was posted in Aircraft Maintenance. Bookmark the permalink.