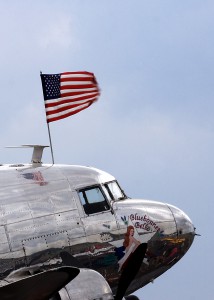 The High Sky Wing sent eleven members and three aircraft to Burnet over the weekend for the Bluebonnet Airshow.  This was the first overnight trip for this airshow season.

The flight down was mostly smooth, but weather moved in overnight making Saturday cloudy and cool.  While the temperatures were perfect, windy conditions made the flying Saturday a demonstration of skill, especially for those demonstrating formation flying. 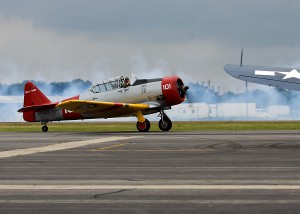 A few drops of rain did not deter a decent sized crowd from coming out to watch aerobatics, formation demonstrations, a cold war era HIND attack helicopter and plenty of warbirds.

The HSW sent the SNJ (pictured at right) piloted by Lance Sommers, the L-17 piloted by Steve Clinton and the Twin Beech piloted by owner James Martin.  Perhaps it is pride in the wing’s aircraft, but it seemed as if the three airplanes of the HSW had the largest number of onlookers. 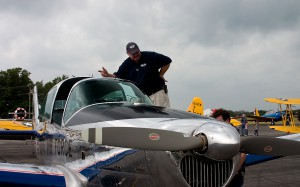 Lines formed around the L-17 Navion and Steve Clinton was all too happy to spend two hours answering questions and giving cockpit tours to children.  All of the youngsters were smiling and talking about being a pilot after Steve worked his magic.

The threat of inclimate weather and high winds prompted the HSW planes to depart early.  After a bumpy ride, all made it safely back to MAF and enjoyed recapping the weekend in the Ready Room.  (On a side note, the skill and professionalism of the HSW pilots were on full display Saturday as they executed smooth, safe landings despite high winds; it truly is an honor to have these talented individuals flying for the HSW.)

The next scheduled airshow is The Big Country Airfest April 27-28 at Dyess Air Force Base in Abilene.

This entry was posted in Airshow, Events, Members. Bookmark the permalink.