N79AG, a 1952 Beech Model D18S, arrived in Midland this afternoon after a brief flight from the now-defunct New Mexico Wing in Hobbs.  The pilot for the ferry flight was Col James Martin, who owns a similar aircraft.  His co-pilot was Col Bob Keating.  The chase crew, in our T-28, consisted of Col Mark Haskin, pilot, and Col Michael Clinton, photographer/videographer/assistant to the pilot/jack of all trades. A special thanks to Col Steve Clinton for transporting the ferry crew to Hobbs in his personal vehicle.

Congratulations to all those involved in bringing this airplane to Midland.  It’s fate is uncertain, but HQ should be reassigning the aircraft in the near future. 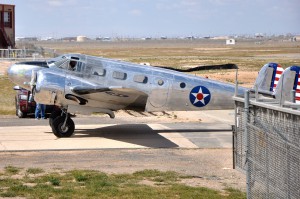 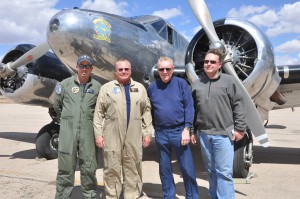 This entry was posted in Events. Bookmark the permalink.